Finca Dinamia is a company producing Organic and Biodynamic premium fine wines, directed toward the most discerning palates of the International Market.
Founded by Alejandro Bianchi (3rd generation of Fine Wine Producers of San Rafael, Mendoza, Argentina). Based on years of professional expertise as marketing manager at Bodegas Bianchi, and motivated by his environmental spirit, he promotes the foundation of Finca Dinamia, a company specialized on the production of sustainable vineyards and wines, pioneer in this category in the south of Mendoza. Our premium flagship product is Buenalma Malbec wine, which holds the Organic – Biodynamic certification.
Finca Dinamia has, as its main goal, the collaboration with the improvement of our Planet Earth and the health of the environment where its vineyards are cultivated.

3rd generation of Fine Wine Producers of San Rafael, Mendoza, Argentina).
Based on years of professional expertise as marketing manager at Bodegas Bianchi, and motivated by his environmental spirit, he promotes the foundation of Finca Dinamia, a company specialized on the production of sustainable vineyards and wines, pioneer in this category in the south of Mendoza.
While working for the family company he formed the first Marketing Team at Bodegas Bianchi and when we was on his 30, Bianchi brought the first product that revolutionized the market of sparkling young wines –New Age, an innovative wine as regards its design and style in a time that was a hit!
In 2005 the created the first organic vineyard in the south of Mendoza and started researching on Biodynamic Cultivation giving origin to a new stage that marked a milestone with the certification of the first biodynamic vineyard of Mendoza, certified by Demeter. In 2011, Buenalma Malbec Rose was presented, the pioneer biodynamic wine of Argentina. 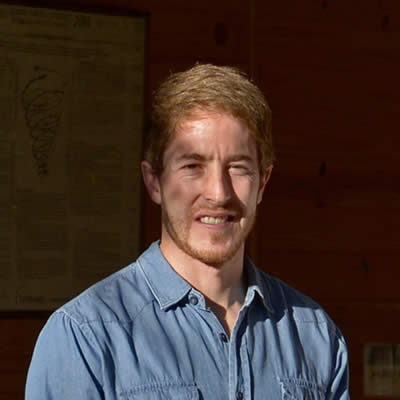 Nicolás Croatto is originally from Mendoza, a province located in western Argentina. Since he was a kid he had been in touch with agronomy as his grandparents were farmers and vine growers, and probably because of this is that he subsequently studied at the Faculty of Agricultural Sciences, in the National University of Cuyo.
Even though he graduated as an Agricultural Engineer in 2011, he had been previously working on the searching department, in wineries, attending trainings and forums related to wine industry. After that, he worked till 2015 at the Argentinean Wine Industry Corporation, oriented to offer technical assistance to small producers, and to the search and development of the associative aspect between them, as a measure to develop their activity.
Nowadays he continues his work in small vineyards of San Rafael and attends meetings and other events related to the activity. Because of this, he met Alejandro Bianchi, who opened the doors of biodynamic wine industry for him, and in April 2016 he became member of Alejandro’s staff, providing his expertise to the management of crops at Finca Dinamia.

Rest of the Staff

Conscience focused on the responsible way of producing sustainable high quality wines, caring about the health of our consumers. Pragmatic professionalism applied permanently to the needs of the market. Receptiveness to I&D and ideas so as to be at the forefront of the market trends. Commitment to materialize challenges and goals. Integration with the teamwork so as to offer our costumers the excellence in service.

We have undertaken to be the referent project on Sustainable & Biodynamic Wines in Argentina, accomplishing the elaboration of high quality and sanitary wines with the aim of generating conscience of the value of sustainability in costumers who look for nurturing their sense of life in their healthy eating habits. Our main resource is the professional and multidisciplinary team that comprises Finca Dinamia. This way, we consolidate our integration aiming a continuous synergy of our members, the farm and the winery oriented to offer the quality and positioning on the most important international markets. With the same spirit that we build a project taking care of the environment, we also work our commitment to RSE following the ethical guidelines of the Fair Trade. Finca Dinamia has as its main objective the improvement of our Planet Earth: “If we are capable of achieving a better life quality for our descendants we will be able to win a significant part of this crusade”.

We will be the formula capable of transforming the conventional into sustainable, the dreams and ideas into facts, the earth’s biodiversity into biodynamic, high quality vineyards and wines; thus consolidating our ability to materialize the consume trend of healthy products which honor viniculture and life.